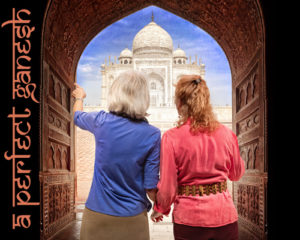 The pilgrimage tradition is turned on its head when two outwardly unremarkable, middle-aged friends throw themselves into a rousing tour of India, each with her own secret dreams of what the fabled land of intoxicating opposites will do for the suffering she hides within. Who else but the golden elephant god could intervene? Fluid in his power to assume any guise, Ganesha is the spiritual center around which the play spins itself, drawing upon the tragic and the comic, the beautiful and the deplorable, until a breathtaking release arrives for both women.

This production is made possible by gifts from Sponsor Circle Members
Frank Schomer and Frank & Susan Skubic, with additional support from
The Clay Foundation-West