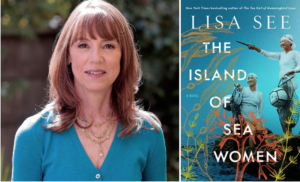 Word By Word: Conversations With Writers host, Gil Mansergh is pleased to welcome the return of bestselling novelist Lisa See with her newest tale of strong women surviving against seemingly impossible odds— The Island of Sea Women.

Booklist has called the novel “Stupendous…Mesmerizing,” and this revealing Word-By-Word conversation delves into the complexities surrounding the creation of The Island of Sea Woman—a work which Lisa See proudly proclaims is the “most mature of all my books.”

Paintings, drawings, photographs, moving pictures, poetry, and letters infuse this episode of Word By Word: Conversations With Writers. This is because host Gil Mansergh’s and studio engineer Anthony Garcia’s guest is the respected biographer Carolyn Burke with her latest book Foursome. The four people who burst forth in this volume are photographer Alfred Stieglitz, painter Georgia O’Keefe, movie maker Paul Strand, and writer/painter Rebecca Salsbury.

Word By Word Listeners are due for a special treat treat today, for Gil Mansergh’s  guest is the celebrated local legend Gaye LeBaron in a conversation about her new book entitled:  The Wonder Seekers of Fountaingrove which she co-wrote with Bart Casey.

By the time LeBaron “semi-retired” in 2001, she had written more than 8,000 columns for the Santa Rosa Press Democrat and was considered “the most popular feature in the paper.” Her interview notes and research material are kept as the Gaye LeBaron Special Collection at the Sonoma State University Library.

In addition to her new book, LeBaron co-authored two other books on local history: Santa Rosa: A Nineteenth Century Town, and Santa Rosa: A Twentieth Century Town.  She also taught Sonoma County history at Santa Rosa Junior College and the Lifelong Learning Center at Sonoma State University, and appeared in two videos discussing Sonoma County history that aired on C-Span in 2015. LeBaron continues to share stories with Press Democrat readers in a column that appear two Sundays each month.

In what has become a Word By Word tradition, your white-bearded Santa, Gil Mansergh, is once again pleased to welcome the book buyers for nine the local Copperfield’s Bookstores, Sheryl Cotleur and Michele Bellah with their carefully considered suggestions for gift books.

Book Buyers play a critical role in a bookstore—because they are the ones who decide what books will be carried on the shelves. As you can imagine, there is a fierce competition between publishers for shelf space, and Michelle and Bellah read hundreds of books each year in their specific areas of interest. Sheryl was a fiction judge for the 2014 National Book Awards and is the Adult Books Buyer for Copperfields, while Bellah selects the children’s books, cookbooks and art & craft books.

This book is testament to the talent and tenacity of the woman who started it all—Mary Fazio, who, in 1959 (at the age of 46), used her $700 life savings to open the original Mary’s Pizza Shack in Boyes Hot Springs, CA—a Sonoma County-based business that has 17 Mary’s Pizza restaurants today

Gathered around the table with Gil are Mary’s son Toto Albano, granddaughter Terri Williamson and grandson-in-law Cully Williamson. The book’s marketing group manager (and former Mary’s Pizza Shack waitress), Laura DiPietro offers insights on how the book was put together.

It is just over a year since the night of Sunday, October 9th 2017, when nearly 111,000 acres and nearly 6,000 homes in the Napa/Sonoma wine country were incinerated by unstoppable flames.

Word By Word host Gil Mansergh marks this occasion by reprising the “After the Fires Are Out” show originally broadcast of November 12, 2017. Gil has added a new ending to todays show by, providing updates on how our fire-impacted Word By Word writers are today.

Word By Word host Gil Mansergh has a spirited conversation with two multi-talented women who worked full time when they wrote their novels about women escaping abusive relationships. Electrical Engineer Suzanna Solomon’s book Montana Rhapsody features a pole-dancer who escapes an assault by three men by stabbing one with the stiletto heel of her shoe and blinding the other two with a can of hairspray. Former Labor and Delivery Nurse and current Psychotherapist Cathy Zane’s book Better Than This features a woman with an older, controlling husband and a past she’s tried to forget.

Gil Mansergh’s Word By Word guests for July are a pair of Marin County writers with books on decidedly different topics. Bonnie Monte’s The Sleeping Lady is a modern, cozy mystery novel set in the shadow of Mt. Tamalpais, and Francine Falk-Allen, who contracted polio when she was three, presents Not A Poster Child which is, as she writes, “a memoir of life as a handicapped person trying to be a normie.”

On the August, 2018 Word By Word: Conversations With Writers, host, Gil Mansergh welcomes the Barcelona-born NY Times bestselling writer Edgar Cantero with his decidedly different new novel This Body’s Not Big Enough For the Both of Us. Edgar writes short stories, screenplays and novels in three languages (Spanish, Catalan, English) that often include women kissing, things exploding and multiple versions of the same event presented like deconstructed Hollywood gangster films from the 1940’s.

This Body’s Not Big Enough for Both of Us features a unique individual as the hard-nosed private eye called A.Z. Kimrean. But having just one name is inaccurate. The personalities of two twins occupy the same body—Adrian is the male with a high I.Q. and photographic memory, while Zooey is the creative female who plays musical instruments, writes, paints and is a practicing nymphomaniac.

During the show, Gil and Edgar chat about the San Francisco private eye genre, hermaphrodites, desert gangster lairs, nymphomania, wether or not eleven-year-old girls can be femme fatales, the impact velocity of an armor-plated Jaguar sedan, and the course of true love—all of which can be explored more completely in the pages of Edgar Cantero’s new novel.